So, I drove up north to be with my family yesterday, after finishing up a couple critical things for work in the morning. There are a dozen or so family members waiting in the intensive care waiting room when I got there around 1:00. Grandma was still on the ventilator in the ICU, and they were keeping her sedated to keep her from trying to pull out the breathing tube.

We were waiting for two things: * My oldest uncle to arrive from Spokane. He was expected in around 4:30, but traffic and bad weather in the pass delayed him until around 6:00. * Her doctor to show up and give us all a prognosis and options. He was due in around 5:30.

From 1:00 to 4:30 or so, family members came and went. Some of the people who lived locally went home or back to work, while others dropped by for a visit. Around 5:00, a dozen or so of us went downstairs and had dinner at the hospital cafeteria.

The doctor arrived right after dinner. By the time he started talking, we had around 20 family members present, and another half-dozen or so drifted in while he was talking, as they got off work. He explained her condition like this:

As he presented it, we had two options–we could aggressively try to fix things or try to make her comfortable. The aggressive side of things didn’t have a lot of options–without kidneys, she was going to need dialysis, but her heart wasn’t up to it. It might work for a couple days, but that was about it. The alternative was to remove her breathing tube and make her comfortable.

Everyone agreed that Grandma wouldn’t have wanted the aggressive treatment. Everyone agreed that she didn’t want the breathing tube in her. She had an aneurysm fixed a year or so ago, and she hated the tube then, and she was trying to pull it out now. Plus, she’d repeatedly asked not to be resuscitated.

None of that really made the decision any easier for Grandpa.

It took them most of an hour to get the staff lined up to remove her breathing tube. She was breathing okay on her own, and was awake long enough for us all to talk to her. Dad made a few jokes that really cheered her up. The last round of tests actually looked pretty good, and her kidneys looked like they were starting to work again.

I made the decision to drive home around 9:00. I’d been able to say goodbye, and it looked like she might be able to make it for another day or two. My family needed me at home, and I missed my wife and kids.

Mom called at 6:26 this morning. I didn’t really even have to look at the caller ID to know who was calling, and what the message was. Good news rarely calls before 7:00.

I did a bit of digging, and found a picture of her from last January that I like, and I suspect she’d have liked, too: 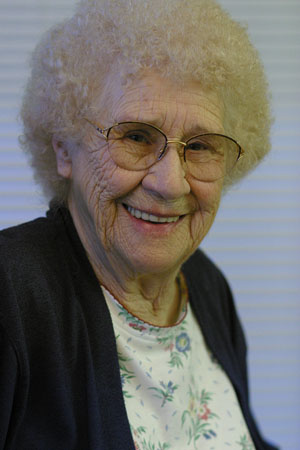