I guess it is the LifeDrive after all…

As earlier rumors suggested, Palm’s newest handheld is going to have a 4 GB hard drive. The rumor mills have given two different names for the product–“Tugsten X” and “LifeDrive.” According to CNet, it looks like Amazon has let the cat out of the bag, listing the PalmOne LifeDrive for $499.

Amazon doesn’t list a lot of details, but the name is really the only thing that was up for debate–most of the rumors list the 4 GB drive, Bluetooth, WiFi, and PalmOS 5.x. Most rumors say 64 MB of RAM, although 32 MB is a possibility.

Here’s one of Amazon’s pictures: 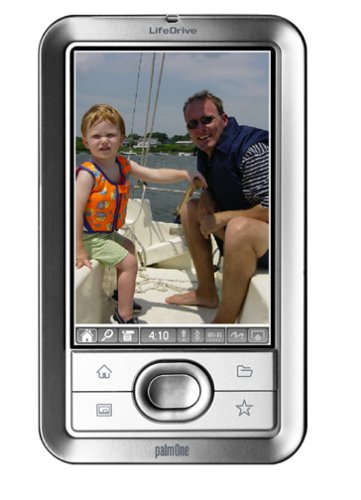 People seem to think that PalmOne is going to market this as something other then a normal PDA/handheld; that implies that the software bundle will be a bit different then normal, but I haven’t seen any details. If you look at the image, notice that the 4 “application” buttons are different then earlier models–it looks like Home/Files/Pictures/Star (?), rather then Calendar/Contacts/To-Do/Memo.

Personally, I think it’s cool, but I just can’t get excited about Grifitti devices anymore. I’m still looking for a new handheld to replace my increasingly decrepit Clie, but I doubt that this will do it for me. Now, if they could add a keyboard and a 2-ish MP camera, all for about the same price, I’d consider it. As things stand, my pockets are just too full, and I don’t see what this adds to my life.